It’s been quite a while since the last cocktail and I figured I wanted to make my triumphant return to the cocktail blog with a really solid drink. I recently picked up some Luxardo Maraschino Cherry Liqueur, and found it to be a very interesting ingredient. It’s a clear bitter liqueur with a distinct cherry aroma and flavor that alone, isn’t something worth drinking. However, the product really shines in small quantities (1/4 to 1/2 oz) in a variety of cocktails.

So today’s drink is something of a modern flair on a classic cocktail. With just a dash of the Luxardo and some Lavender Bitters you get a VERY well balanced drink.

The drink has the lime and gin aroma of a classic gimlet along with its signature yellow-green jewel appearance. It starts light and sweet with a forward floral note of the lavender bitters. You’re rewarded with a sweet lime flavor on the mid palette, and to finish it’s a 3 stage level of complex flavors of; bitter, strong, and a little floral and bitter cherry as it settles.

Both the Luxardo and the lavender bitters and their own unique bitter complexity to this classic cocktail. If you’re looking for a modern twist on an already nearly perfect cocktail, this could be one for you!

Stir with ice and strain into a (larger) chilled cocktail glass. Garnish with a floating lime slice. 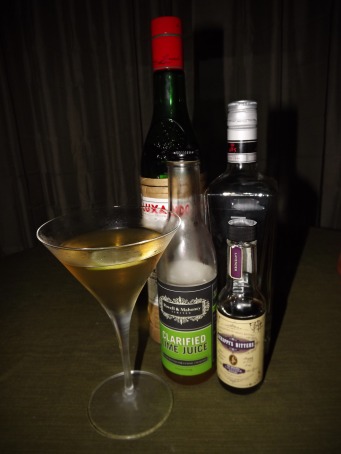 So it’s been nearly 4 Months since you heard from me last and I thought it was about time for an update. Since early December I’ve been in the process of moving which as you may have guessed has put a damper on the bar considerably. I went from a strong 36+ bottle set, to a set of 1 (and some extras that no one uses anyway…like Campari.) In the process of moving from July to December I scaled back the home bar significantly, and now I’m starting from (near) scratch once again. The time in between however has allowed me to both learn and expand what I want this blog to contain.

While I started this blog with the intention of introducing a new cocktail every week, it has become more of an outlet for culinary creativity in the “craft cocktail” realm. My exploration of good and near perfect cocktails, has lead me to pursue a set of drinks that is both fine in its quality of ingredients, as well as in its creation. From about 2015 on it has been less about “new” drinks and more about ones that I feel are worth highlighting.

This concept of the “craft” cocktail is something that has stuck with me throughout though. Part of the artistry of the drink is more than just a new recipe, but also about the ingredients that you use. Subsequently one of my favorite YouTube channels – Common Man Cocktails expand their branding into a new channel called “The Craft Cocktail” There seems to be a trend of those that make cocktails, calling their art “craft” to mimic the exponential growth of the craft beer industry. That said, I think this blog is a unique reflection on that concept. In short I think a new tagline for the blog should be “Craft cocktaisl with an artist’s touch”

[Food for thought] But I digress… 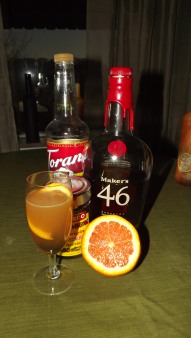 Classic with a Twist

I want to talk briefly today about the garnishes in cocktail, specifically the use of mint or fruit in some drinks. I have found over time that I really relish the maraschino cherry, or lemon wedge in a cocktail, as it adds not only color and contrast to a drink, but a unique bit of sweetness before or after finishing the cocktail. Finishing a whiskey sour (as I type) and having an orange or lemon slice and a cherry to finish the drink feels oddly satisfying. Fruit garnishes go a long way to making a drink both presentable as well as making it more well rounded.

Sucking on a lemon peel, or eating the pulp of an orange can make the taste of a drink really come to life! The “artistry” of craft cocktails is more than just spirits and bitters, but the garnishes as well! Don’t forget my fellow mixologists, that the garnish can be just as important as which whiskey you choose in your sours.