So after a long break from posting new cocktails I’m back with a new MoM original that I’ve been making for a majority of the year. Blackbeard’s Curse highlights two main ingredients Rum and Bitters, in this case it has to be Bittercube Blackstrap in order to make the flavor just right. Visually you’re looking at a cloudy dark rum, brightened up with the lime wedges floating in the drink and on the nose are hints of lime, vanilla, and cinnamon. On the palette you’re greeted with a sweet lime flavor which moves quickly to the blend of rum and bitters giving you a molasses, nutmeg, cinnamon vibe. It finishes with a little burn as it’s still pretty much just straight Kraken on ice but it’s a refreshing punch with the lime making a sour comeback near the end.

I created this as a simple drink for after work, and it’s become a new favorite rather quickly. For a long hard day keep the recipe as is, but if you’re looking for a slightly sweeter variant substitute in 1/2 oz simple syrup or 2 teaspoons of superfine sugar in place of the cubes. Outside of that pick up your blackstrap bitters and enjoy!

In an old fashioned glass place 1/2 a lime cut into 4 wedges. Toss in 2 sugar cubes and give a healthy douse of bitters. Muddle together until sugar is well incorporated. Top with ice and add rum. Stir well.

I have been working on this drink design almost as long as the blog has been in existence (about 4 years?). While it has gone through several significant changes over the years, I’m finally ready to present it as another MoM original! It was my purchase of Heering Cherry Liqueur which allowed for the final breakthrough in making this drink possible. It’s sweet but strong taste of fresh cherries is what gives this layered shooter it’s distinct color and flavor.

So unlike many of the drinks on this site, this one is a bit more ingredient specific. While I’m sure you could substitute one ingredient for another, I feel it would be a disservice to yourself or your guest to cheapen out on anything here. Like most layered cocktails and shots the presentation on this drink is top notch. For a layered shot you’re only aroma will really be your top layer, so in this it’s the Kraken Rum (but since that’s my favorite you’ll see no objections for me). Shots go by quick, so tasting notes are a little tough. You’ll get a hit of rum, followed quickly by mild cherry, and a nice finish of sweet raspberry. I find that the key to a great shot is one that doesn’t burn all the way down and make you hate yourself. The Heart of Darkness starts pretty mild (as far as layered shots go) and remains pleasant the whole way down. If you’re looking for something for your next party to impress your friends with, give this a try. Especially if you’re wary of trying a layered drink (as the raspberry makes the daunting task a breeze).

In a (modern style) shot glass place a single raspberry. Slowly pour over each ingredient starting with the sweet lime juice and finishing with the rum. Serve with a tooth pick to spear the raspberry and eat it then down the shot. 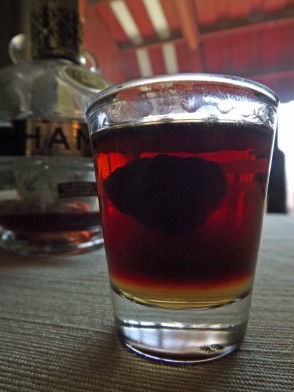 “Stake through the heart, pretend I’m a vampire!” -David Mitchell

Figured it was about time I got around to posting this one. This is a leftover from about 4 months ago when I was planning on doing another “blended cocktails week.” However I instead just made this for 4 days straight, because it was just that good! (Glad I wrote down my tasting notes).

A wonderfully blended and sweet drink, this one comes very close to perfect. My recipe book calls for a whipped cream and banana garnish, but honestly I feel it kinda ruins it a little that way.

For this cocktail you are greeted with a wonderful rum and banana aroma. First taste (it may be hard to pick it out) starts with citrus and sweet then moves to a creamy rum on your mid palette. After just a second or so you’re lead straight into a dominant banana flavor with subtle amaretto on the finish. This drink is absolutely worth making! For yourself or a crowd I highly recommend checking this one out!

Blend all ingredients except the dark rum with a cup of ice. Pour into a Pint (or other tall) glass. Float dark rum (Kraken Preferred) on top. Optional garnishes: Banana Slice and Squirt of Whipped Cream 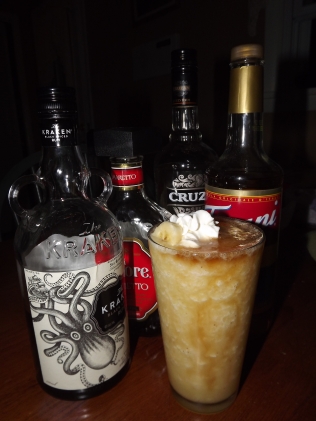 No name. No fancy setup. No witty comments.

I came home from work the other day and just wanted some dark rum. However, being summer I didn’t want it straight, nor was I in the mood to mix up a tiki style drink. So I thought simple. VERY simple, and modeled this drink after the old fashioned.

Start with a single sugar cube in a short glass. Add chocolate bitters until cube is saturated (and brown). Squeeze on 1/2 a lime (fresh juice only). Muddle sugar for easier mixing. Add ice, rum, and stir. Enjoy

Taking a bit of inspiration from The Drunken Moogle once again, this is my first original video game cocktail. The game if you are unfamiliar with it is a large open world space simulator. While there is some trading, bounty hunting, and exploring, most of the time you’re enjoying the soundtrack while flying through empty star filled space. The inspiration of this drink was the basic cockpit view of mostly orange over the darkness of space. I played quite a bit with the idea of an orange liqueur floating over the drink, but decided to use an actual orange slice as a garnish to get the right balance of color for the drink.

So on to the drink’s flavor and presentation. The drink itself is a deep purple color, but if you weren’t holding it up to the light all you’d call it was “black.” The orange on the drink gives bit of mystery as to exactly what flavors are in play here. The drinks has an inviting juicy aroma, with a subtle bit spiced rum. The drink starts with a nice sweet start, a strong rum taste on the mid-palette, then finishes to a complex fruity taste of the mix of juices and moonshine. It should be noted that the grenadine you use will be very important here. Don’t use a cheap bottle of Rose’s but instead look for something that actually gives you the natural pomegranate flavor. I’m also not usually one to specifically recommend a brand name alcohol, but I think anything other than Kraken would ruin the cocktail.

This drink is to give you the idea of life in a large galaxy of traders, explorers, and pirates. It’s a drink that inspires the makeshift alcohol of space living (thanks to the moonshine) but the complexity of 1000 years of cocktail evolution. Take a sip and jump into hyperspace with this MoM Original!

Mix all liquid ingredients, but the Kraken in an iced tumbler or lowball glass. Float Kraken Rum by pouring it slowly over the ice. Slowly add in orange (as to not break the rum float). Enjoy!

Today’s cocktail is a very interesting mix with some dark rum (then again it may depend on your choice rum). It’s dark sea foam green color adds intrigue and mystery as a start. It has a pleasant pineapple aroma and the lime garnish makes for a rather inviting mystery. It starts light and sweet, moves quickly to a citrus mix, then to a stiff spiced rum finish. It’s pretty good overall, but it is equally mysterious in taste and looks.

Shake and Strain into a chilled cocktail glass garnish with a lime wedge.

Well this was supposed to be a 2 for 1 tuesday, but I’m not getting around to the post until after midnight, so now it’s just two drinks without the snappy title. So today we’ve got two interesting cocktails, one much better than the other.

First up is the “Wall Street Wizard,” which is straight alcohol stirred and strained for a great emerald look. Unfortunately that’s about all the drink has going for it. It has an earthy citrus aroma, but so much of the midori flavor is lost with the other alcohols. It starts with a hard curacao bite and finishes with equally hard gin flavor. It’s not one I recommend very much as it’s a tough one to drink, unless you’re looking for something VERY different:

Stir with ice and strain into a chilled cocktail glass.

Hypnotized by the color…so your think it’s better than it is.

So next up we’ve got something much better. The “.44 Magnum” is a powerful mix that doesn’t quite taste as powerful as the ingredients at work here. The topping of 7Up/Sprite makes for a citrus fizz aroma and start to the drink. Mid pallete is a sweet/sour rum, followed by a Jamaican dark rum finish with a hit of pineapple. Due to the less than appealing color and presentation in this drink, an opaque tiki glass would probably be better than the listed “bucket glass” in my recipe book.

Shake all but sprite with ice. Strain into an iced tumbler (or tiki glass). Top with sprite. 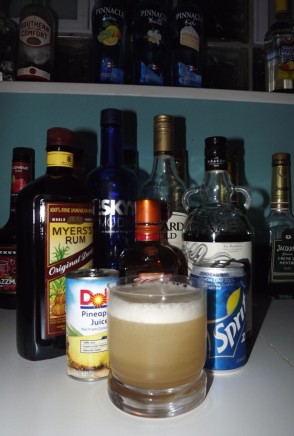 “The most powerful handgun in the world”

I’ll be the first to admit that a shot isn’t really a solo drink. In fact it’s not one that is even a “smart” choice on most occasions. However, the art of layering a shot really fascinates me. Specific gravity of different alcohols cause the higher percentages to float over more sugary and dense liquids. I modeled the Black and Mint after both taste and a strong visual component.

The drink starts with a hard bite, rolls into a powerful refreshing mint, and drops off with a sweet finish.

Alcohol Rating: 9/10
Overall Rating: 7/10
Make it Again? Currently on the Menu (but shots are more for parties)

Standard Shot Glass: Start with a dash of simple syrup at the bottom of the glass. Layer in crème de menthe to just under half, add peppermint schnapps until almost full. Splash dark rum on top